3 Ways to Eat an Artichoke 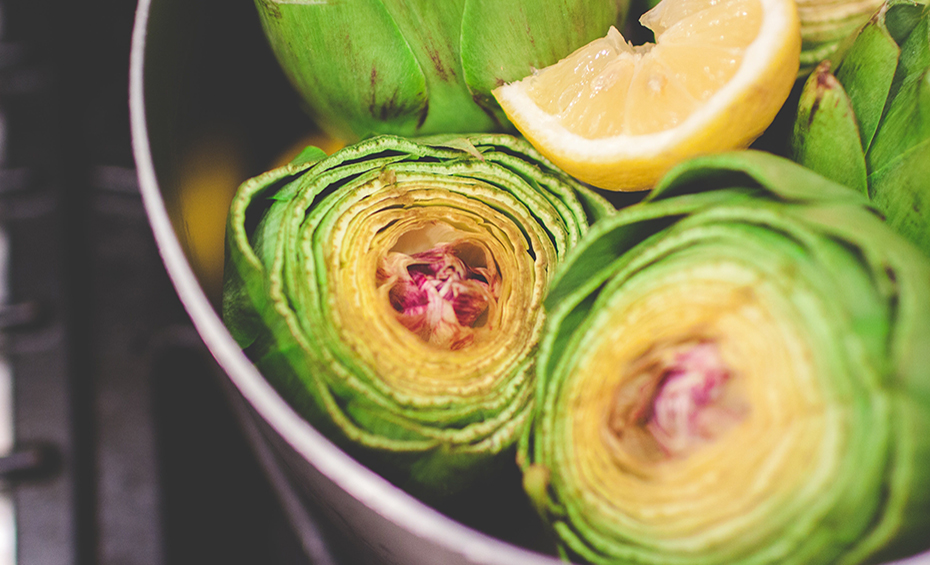 You have to give it up to the prickly artichoke – it’s a master at defense. Inside that tough and spiky armor-like exterior is a delicacy prized for its yummy flavor and superfood health benefits (especially folate and vitamins C and K). This intriguing green and sometimes purple-tinged bulb is actually the bud of a thistle plant, and you will start to see it showing up at farmers’ markets and produce sections in the spring. The artichoke is probably one of the most intimidating vegetables you’ll encounter, but after learning a few easy steps to pierce its armor, this is really an easy and quite rewarding veggie to prepare!

The humble artichoke is more than its challenging appearance would suggest. It has been beloved by Mediterranean societies since ancient times. In Greek mythology, the leader of the gods, Zeus, created the artichoke after one of his many mortal love affairs gone wrong. The edible thistle also shows up in the histories of early Romans, as well as ancient Moorish groups living in southern Spain and the island of Sicily. Catherine de Medici is credited with bringing the artichoke with her from Florence to the court of France.

No doubt a jar of marinated artichoke hearts is a great pantry staple, but what can you do when you find a fresh green globe in-season? We can turn to some of our favorite Mediterranean kitchens to find 3 ways to prepare and eat fresh artichokes. Grab your artichokes and olive oil, and let’s dive in! 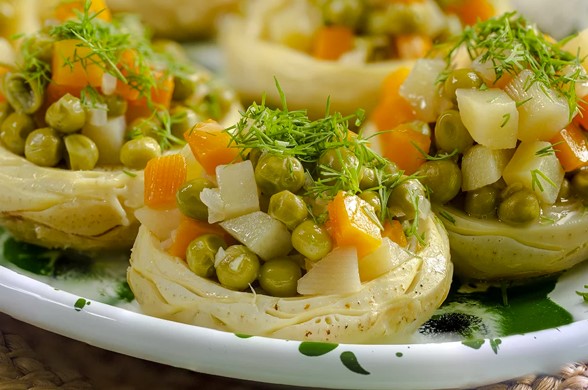 In Turkey, artichokes (enginar) are sold at the market already pared down to their smooth white heart and swimming in lemon water to keep them fresh. In season, you can often spot sellers on the street busily peeling artichokes to save the home cook some time. As it’s unlikely you’ll find raw, ready-peeled artichokes in your local area, you can do this step yourself. This recipe discards the leaves and uses only the fat white disc of the heart. Unless you are using baby artichokes, you must also scoop out the hairy fibers of the ‘choke’ – you might not really choke if you eat it, but it’s definitely not appetizing! And remember not to throw the stem away, it’s also delicious when peeled and cooked.

This dish follows a style of Turkish cooking that’s heavy-handed on the olive oil. These zeytinyağlı (with olive oil) vegetable dishes are served cold or at room temperature, and are wonderful for a summer meal with a side of bread for catching all the healthy fats. The artichokes we’re focusing on here are poached in an olive oil liquid with veggie companions until tender. The artichoke is served up with variations of pea, diced carrot, onion, potato, and most importantly fresh dill, sitting prettily on top. Eat with a squeeze of lemon juice.

To find many versions of this recipe online, you can search for ‘Zeytinyağlı enginar recipe’.

One common piece of advice for any artichoke recipe is to remember that the insides will turn brown when they touch air, so you will want to rub exposed areas with lemon juice, or submerge the bulbs in lemon water, after you trim and prep them. 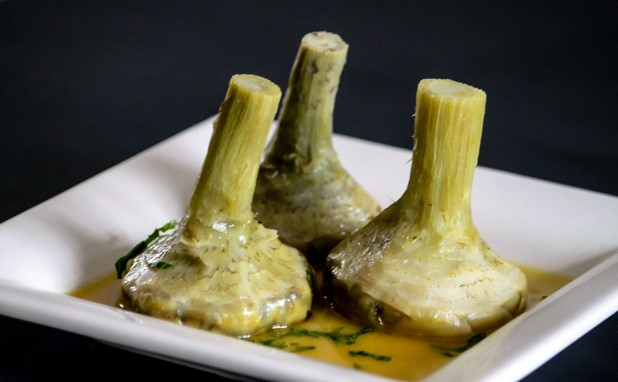 Italians also love versatile and hardy artichokes (carciofi). They are eaten in all different regions – served raw as a crudité, stuffed with various seasonings and baked, chopped and grilled, deep fried, marinated and preserved, and arranged in salads and atop pizzas. Apparently there’s more than one way to stuff an artichoke, and you can find lot of different recipes for Italian stuffed artichokes out there. In contrast with Turkey’s favorite artichoke recipe, the Italian recipes tend to chop off the artichoke’s crown and leave more of the bottom stem and leaves intact in order to have plenty of crevices to stuff. Some recipes use bread crumbs mixed with cheese and herbs, and others make it even more simple.

Traditional Roman-style artichokes are a good place to begin. The recipe typically calls for stuffing the spaces between the artichoke leaves with a paste of garlic, parsley, mint and olive oil, then simmering in water and white wine until tender. Serve warm or at room temperature.

To find many versions of this recipe online, you can search for ‘Carciofi alla romana recipe’.

Simply leaving the whole artichoke to steam is the easiest way to prepare this sturdy veggie – this method involves a minimal amount of trimming, peeling and stuffing. And frankly, it offers more of an adventure for the diner. Once the artichoke has been steamed until tender and cooled, the rhythmic dining process can commence. Pluck off a leaf, dip in sauce (olive oil with lemon is recommended), scrape off the bit of flesh at the base with your teeth, and repeat. Eventually you’ll come down to the purply white fuzz of the thistle’s choke, which you should scoop out with a spoon, then continue to the prize at the end of your mission – the delectable artichoke heart!

This simple method of preparation is common wherever artichokes are found, so you may just search ‘whole steamed artichoke’ to find a recipe.

There is some overlap in methods here, as Turkey, Greece, and Italy all offer related variations of poaching, steaming, and stuffing artichokes. We hope we’ve pointed you in the direction of some great traditional recipes so you can find the one that speaks to you. Next time you spot one of these lovely thistles, try something new!